Enter the Way Back Machine. The Copy Grove "headquarter" is relocating this fall to warmer climes (oh how I won't miss brutal winters), and as I was going through my hoard of old papers (being a writer, I tend to keep a lot of handwritten things like cards, diaries and notebooks from the past), I happened upon an old "manuscript" - my high school graduation speech. Take a step back in time with me. I'll set the scene.

It's the late 1970's, and I'm graduating Bensalem High School and planning to go to college to study communications. I've been voted by my peers and teachers to speak at graduation through a school-wide contest, representing the Continuing Education track of Bensalem High School.

Here's the manuscript of my speech - complete with errors, crossed-out words, and corrections, and therein lies part of the charm of this bit of hand-written memorabilia. The other part of the charm lies in the message ... 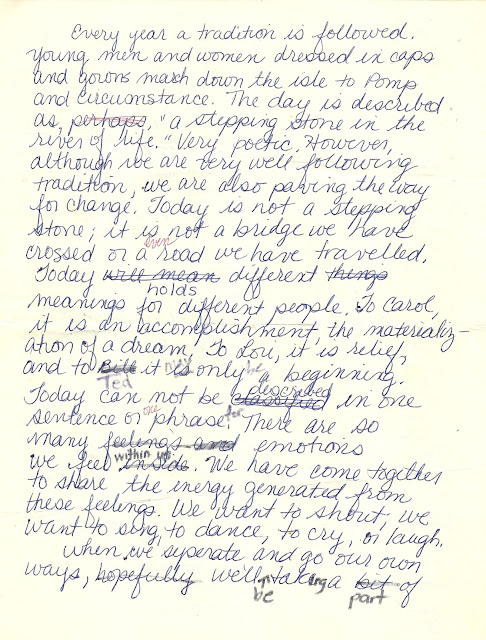 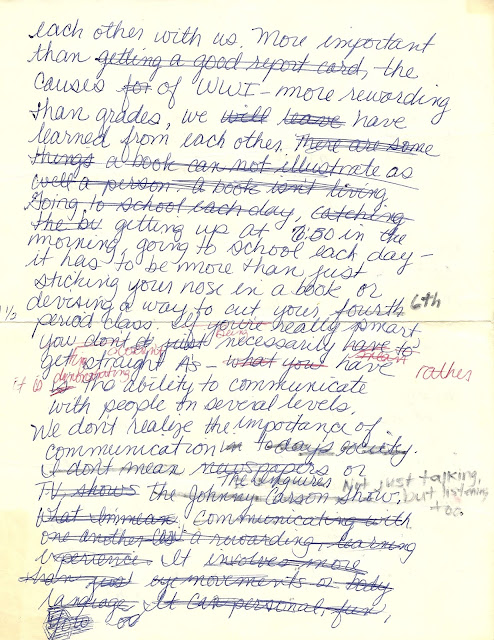 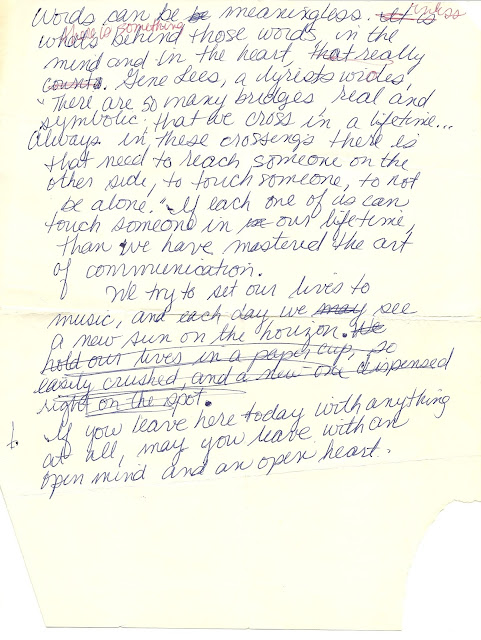 My quote is featured in the 2015 Woman's Advantage(R) Calendar. Here is my quote ... 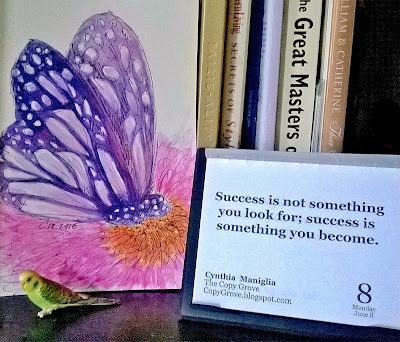 A big pencil tip - #48 graphite. It's my dad's vintage Koh-i-noor 48 mechanical drafting pencil, made in Germany ... thing has got to be from the 70's or earlier. 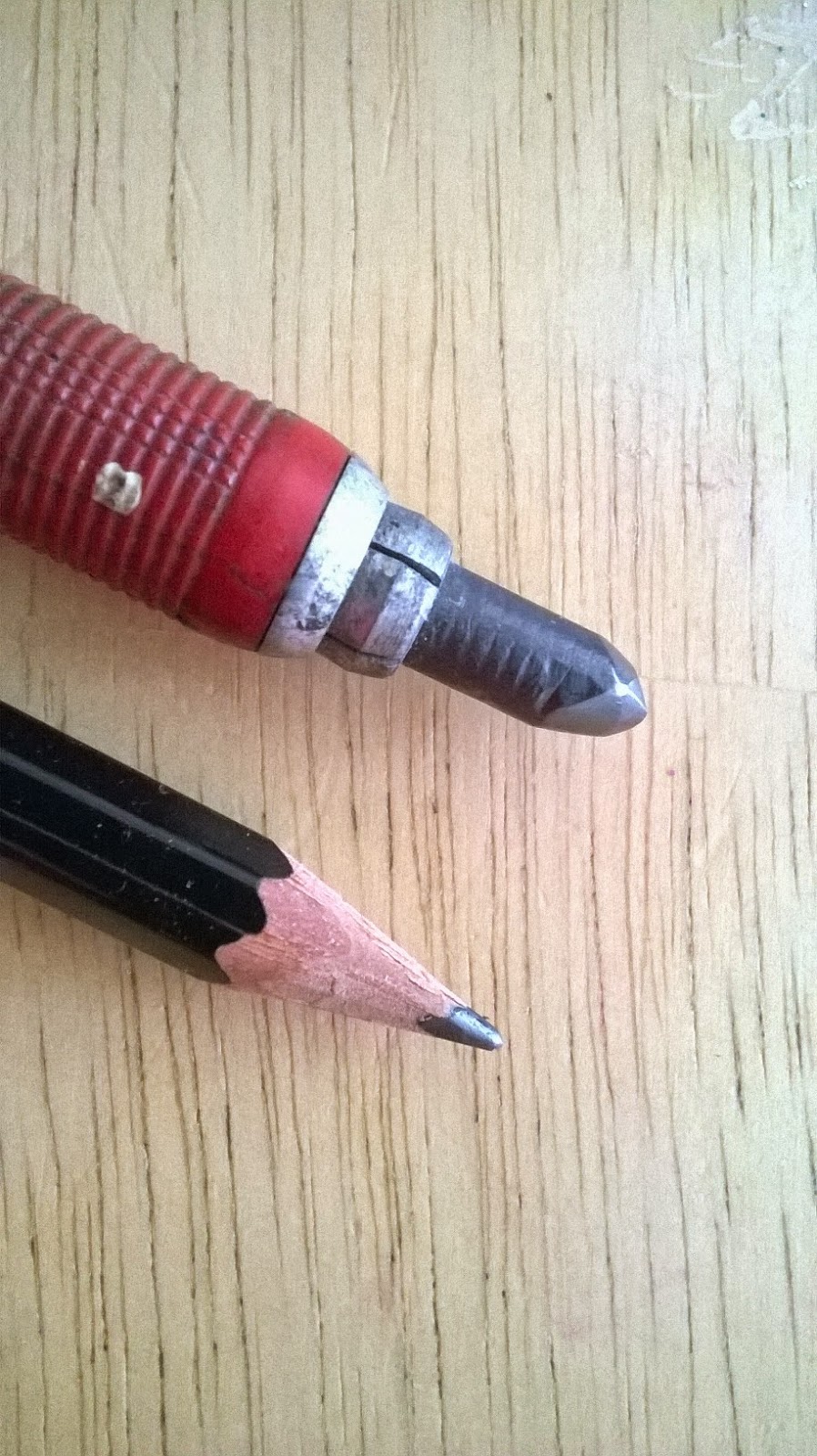 Between assignments, I doodle in my watercolor journal ... 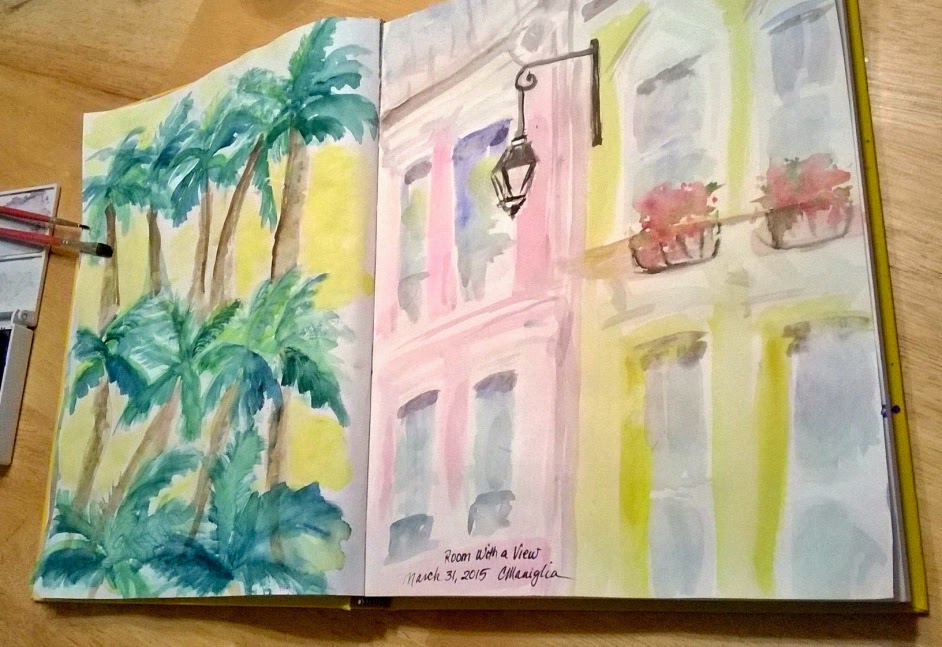 Room With A View
No comments:

Before there was Photoshop, there was the airbrush ... and my dad

My father practiced the art of airbrush. He was a commercial artist from the 1950's until the early 2000's. 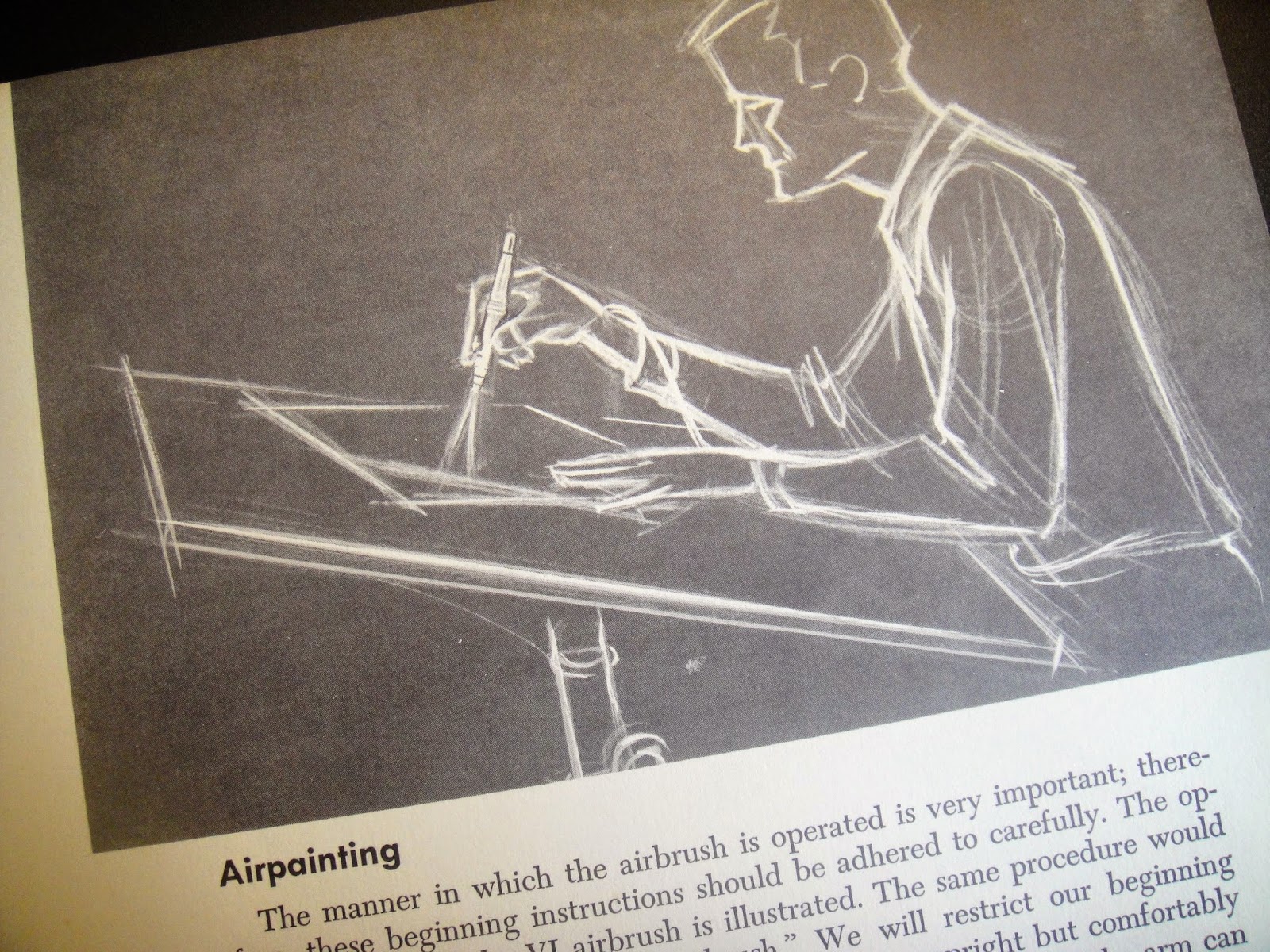 Over fifty years of airbrushing - that's my dad's legacy, working at agencies in Philadelphia and eventually for himself with his own studio. 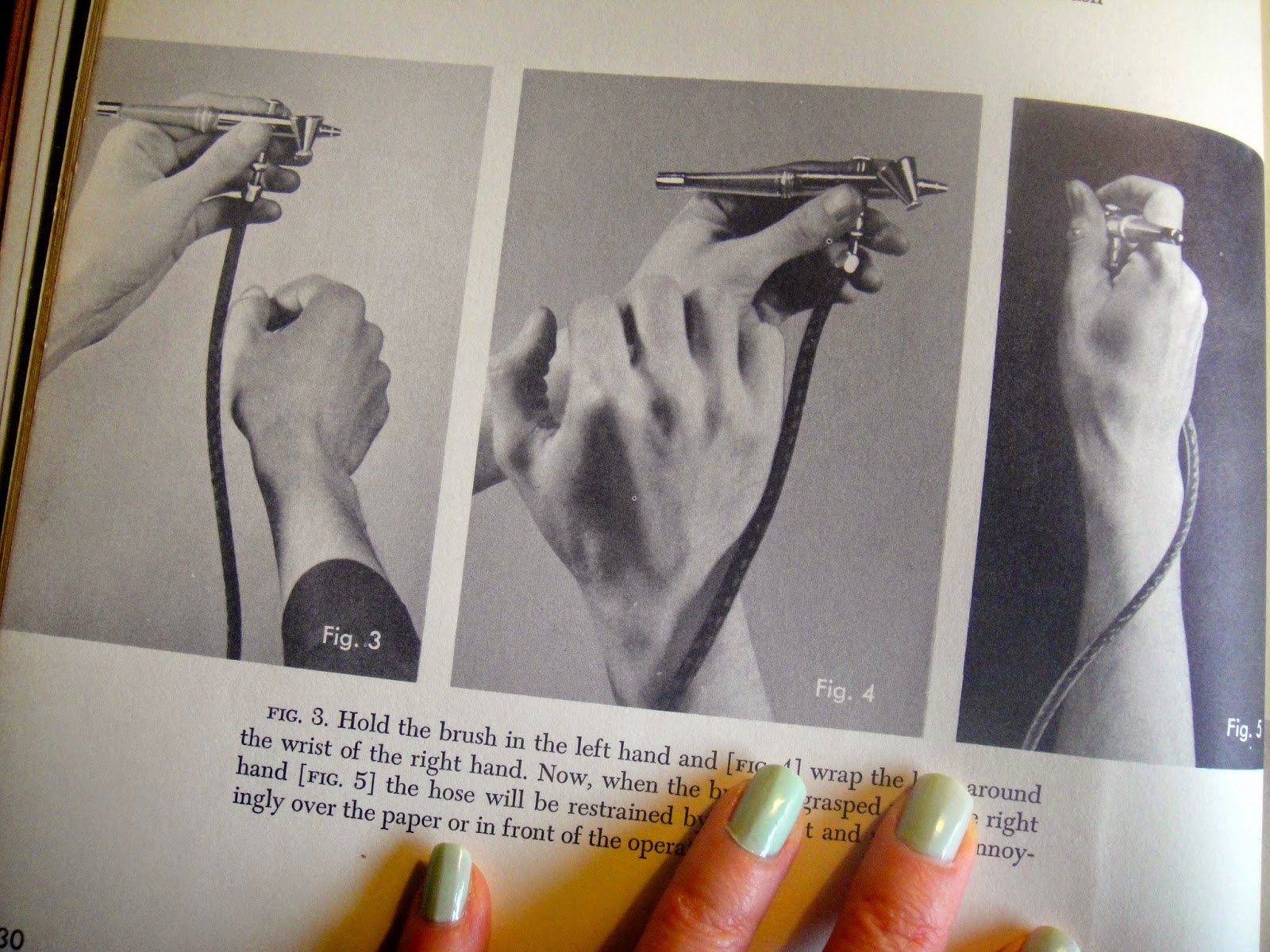 The proper way to hold an airbrush ... 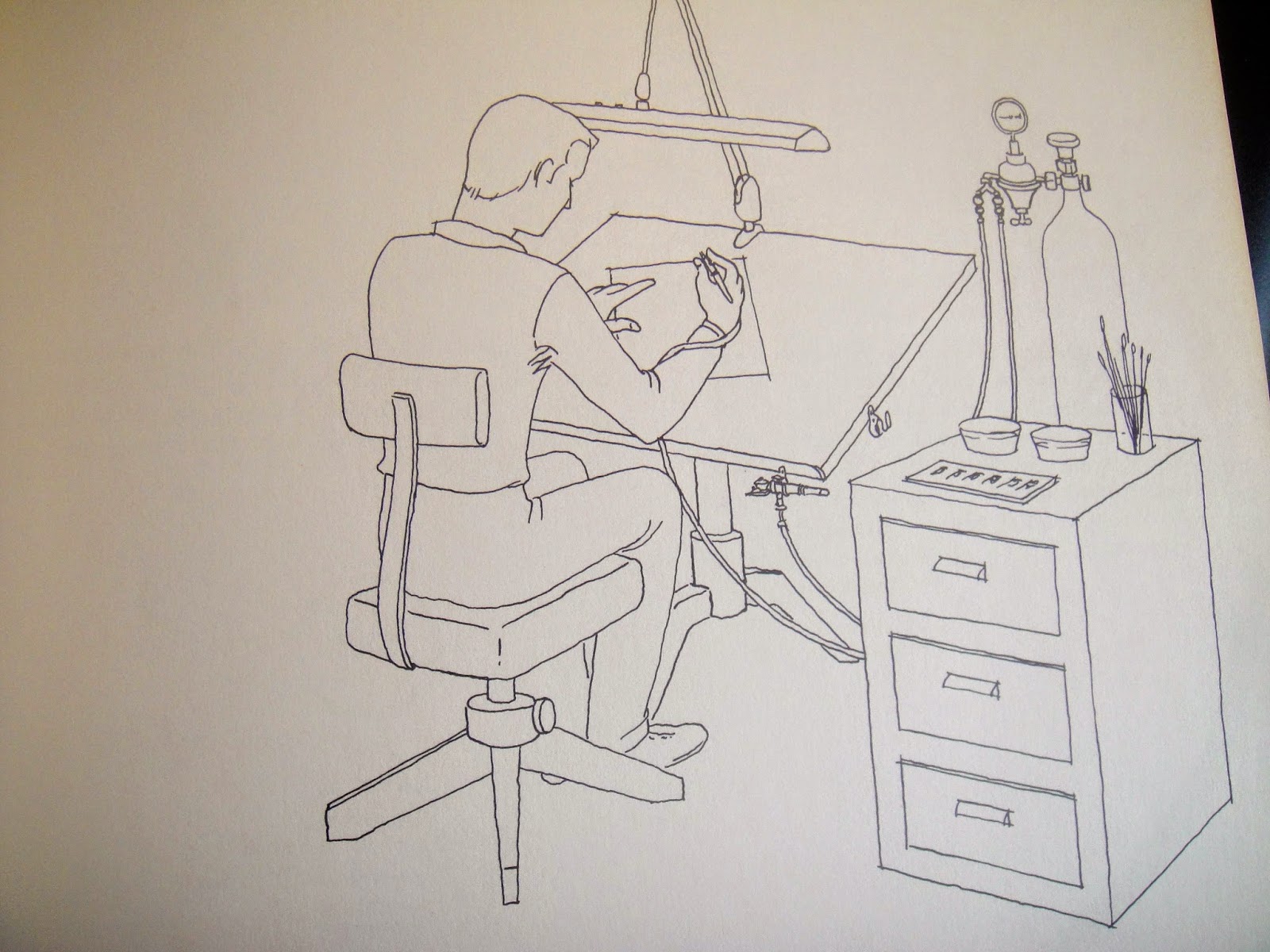 This is exactly the kind of set-up my dad had when he worked. He also has a cart filled with paint, mixing trays, brushes, airbrush tips, and more by his side. 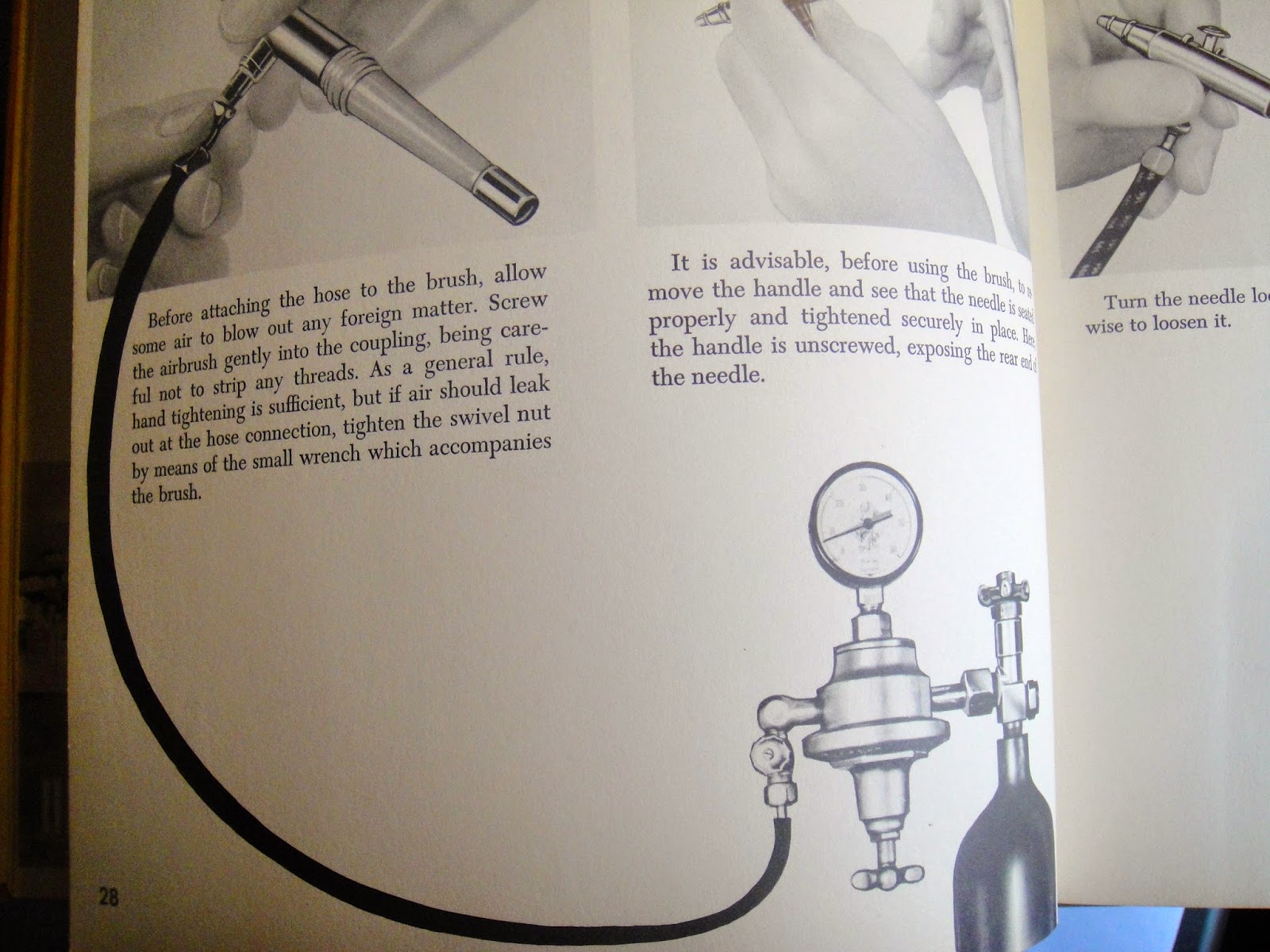 The air pump created a constant hum and rhythm. 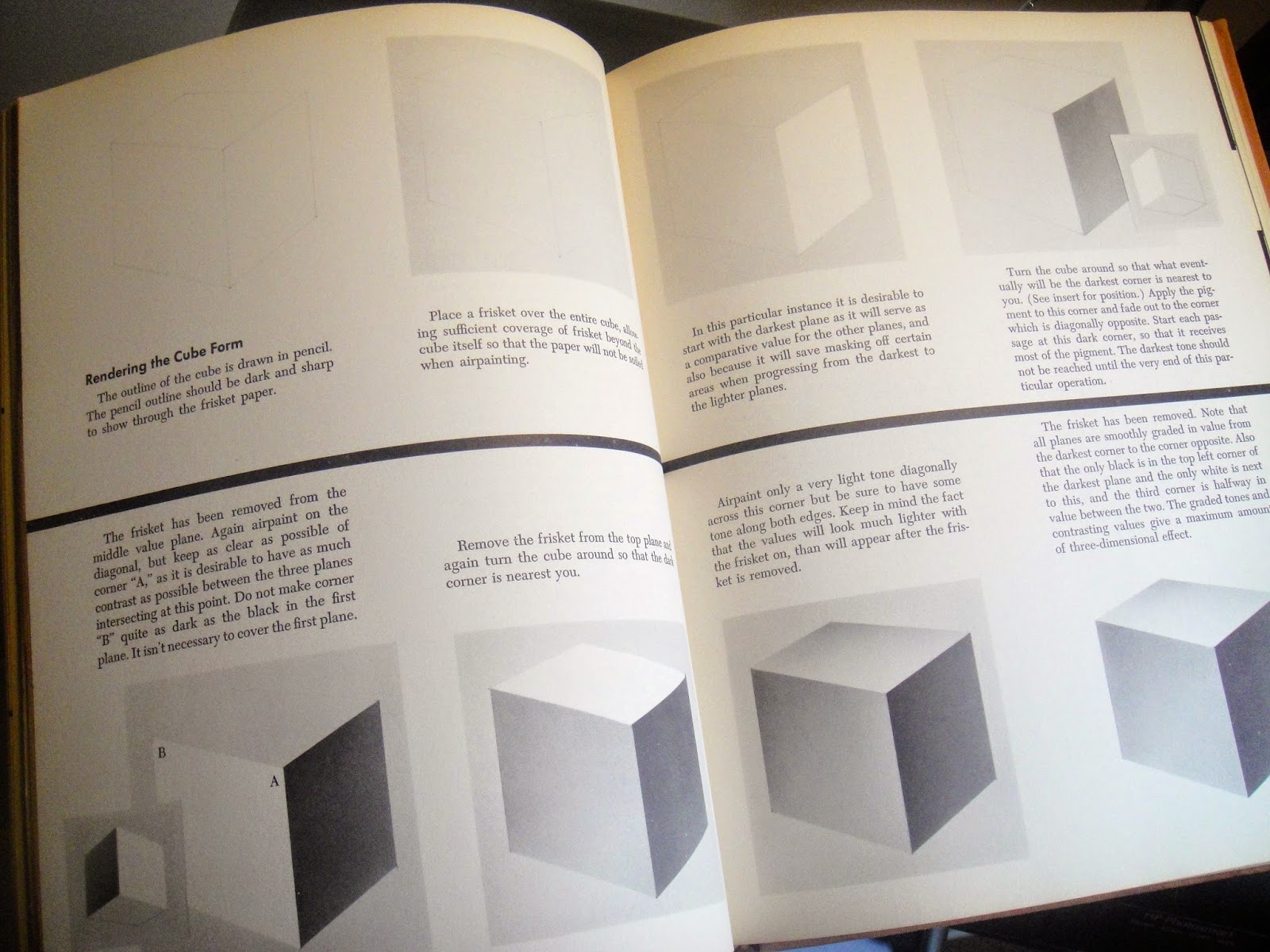 Gradations were sprayed at various angles and strengths...everything was done by hand. 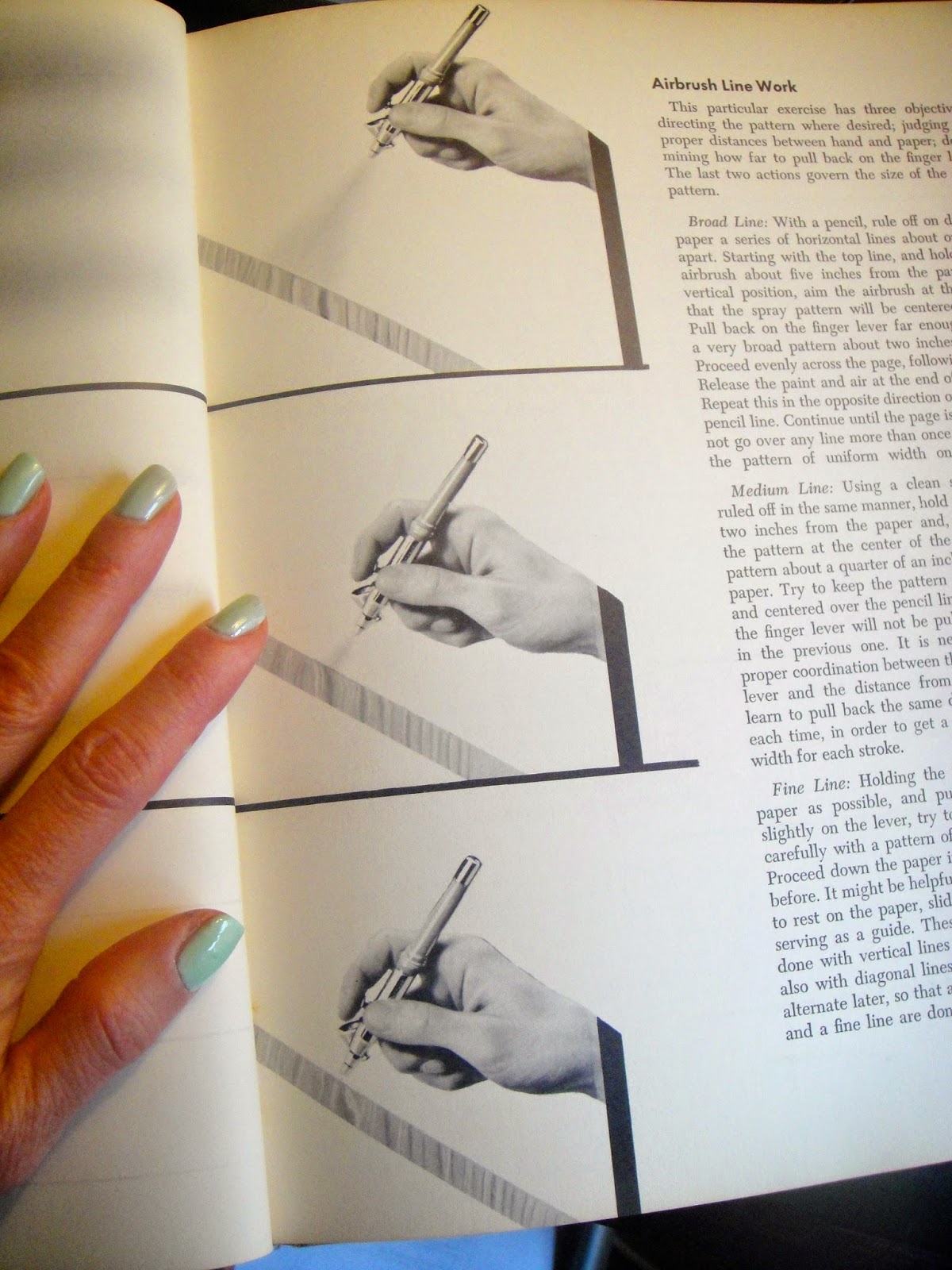 Working on photos that had to be retouched to increase sharpness, edit out unwanted elements, and alter in other ways incorporated the use of friskets - sort of like housepainter's tape - to protect elements in the actual photograph that needed to remain the same from being marred by the artist's paint. 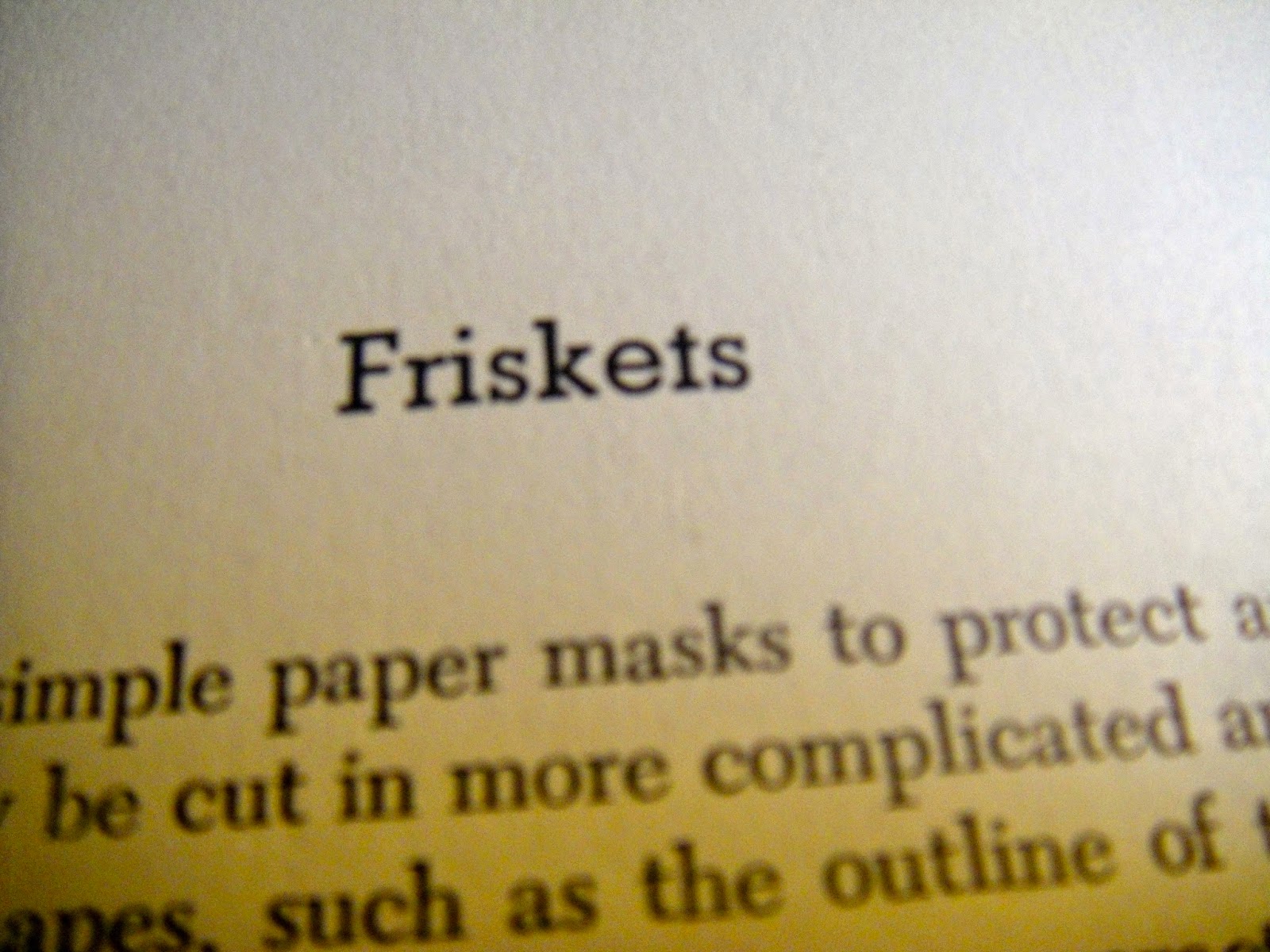 One hallmark of my dad's expertise was chrome lettering, which many of his clients requested. He retouched for Singer American Meter Division and Ibanez Guitars in this area, among many other clients. 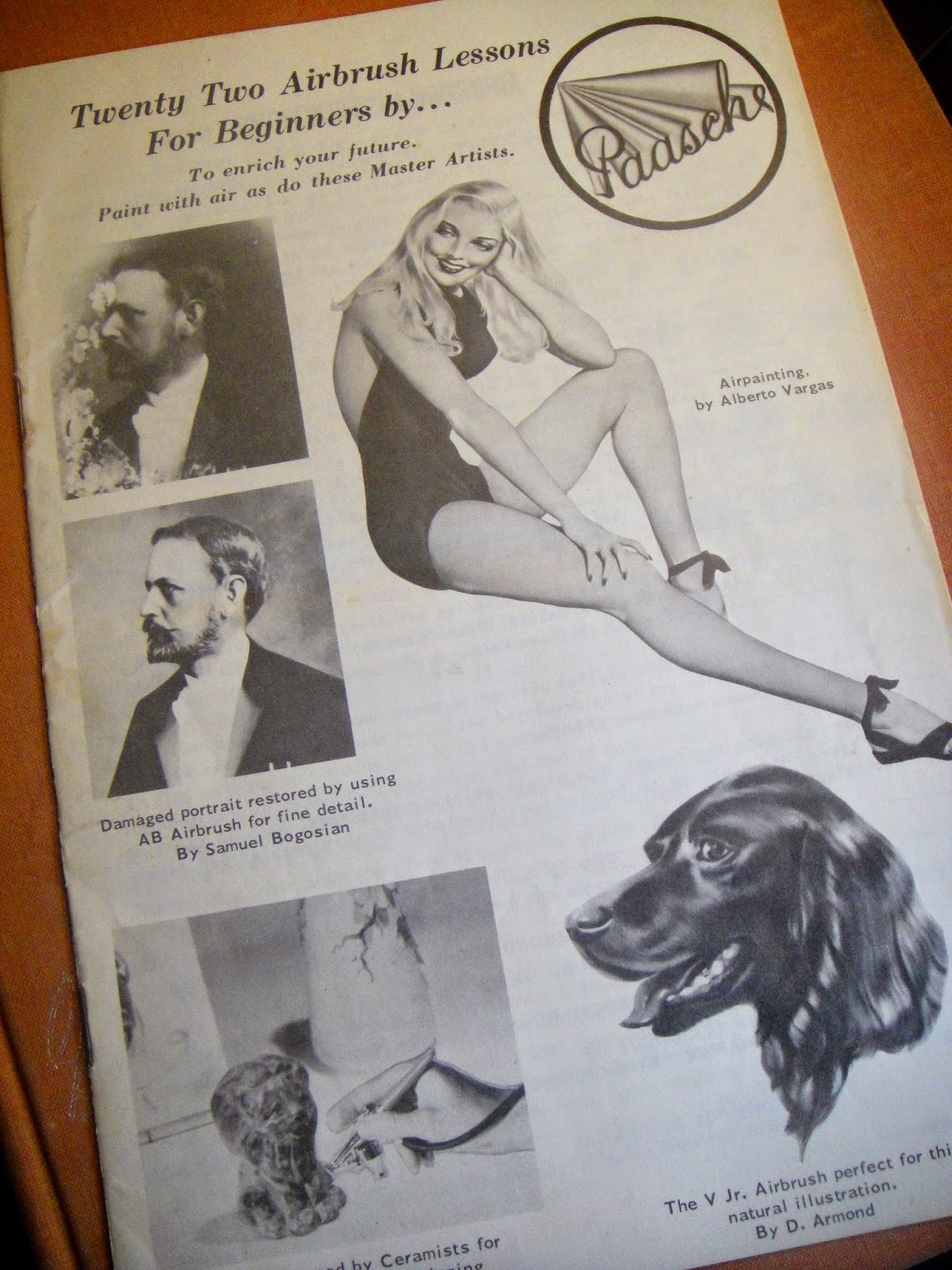 He designed many logos, including the Harris logo still used today in TV commercials and on their service vans. My dad's career in advertising is what spurred me to become a copywriter.

You can learn more about the art of airbrushing. 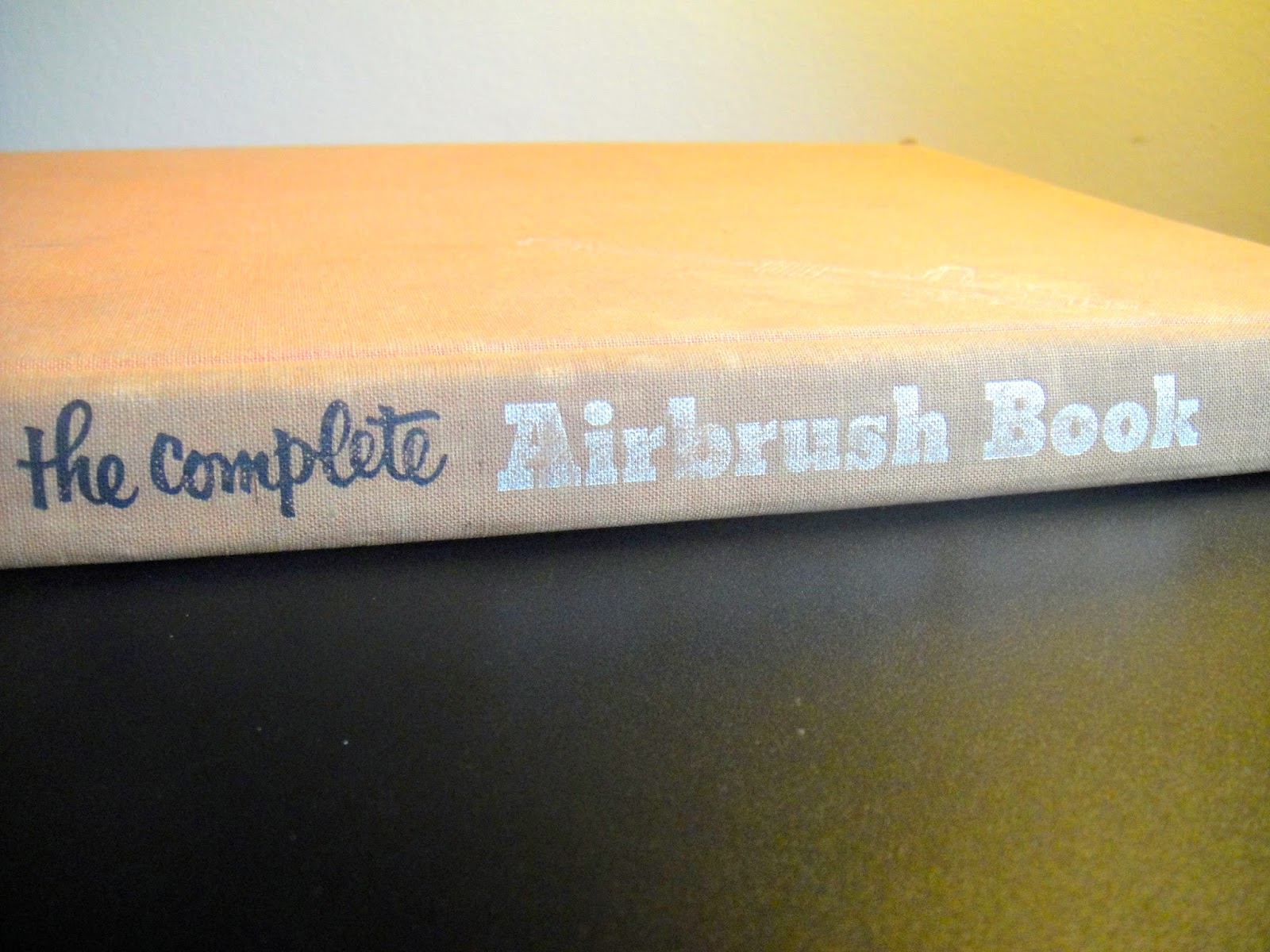 These photos are from one of his airbrush books. I grew up watching my dad work with these tools and retouch photos using the techniques described in this book. 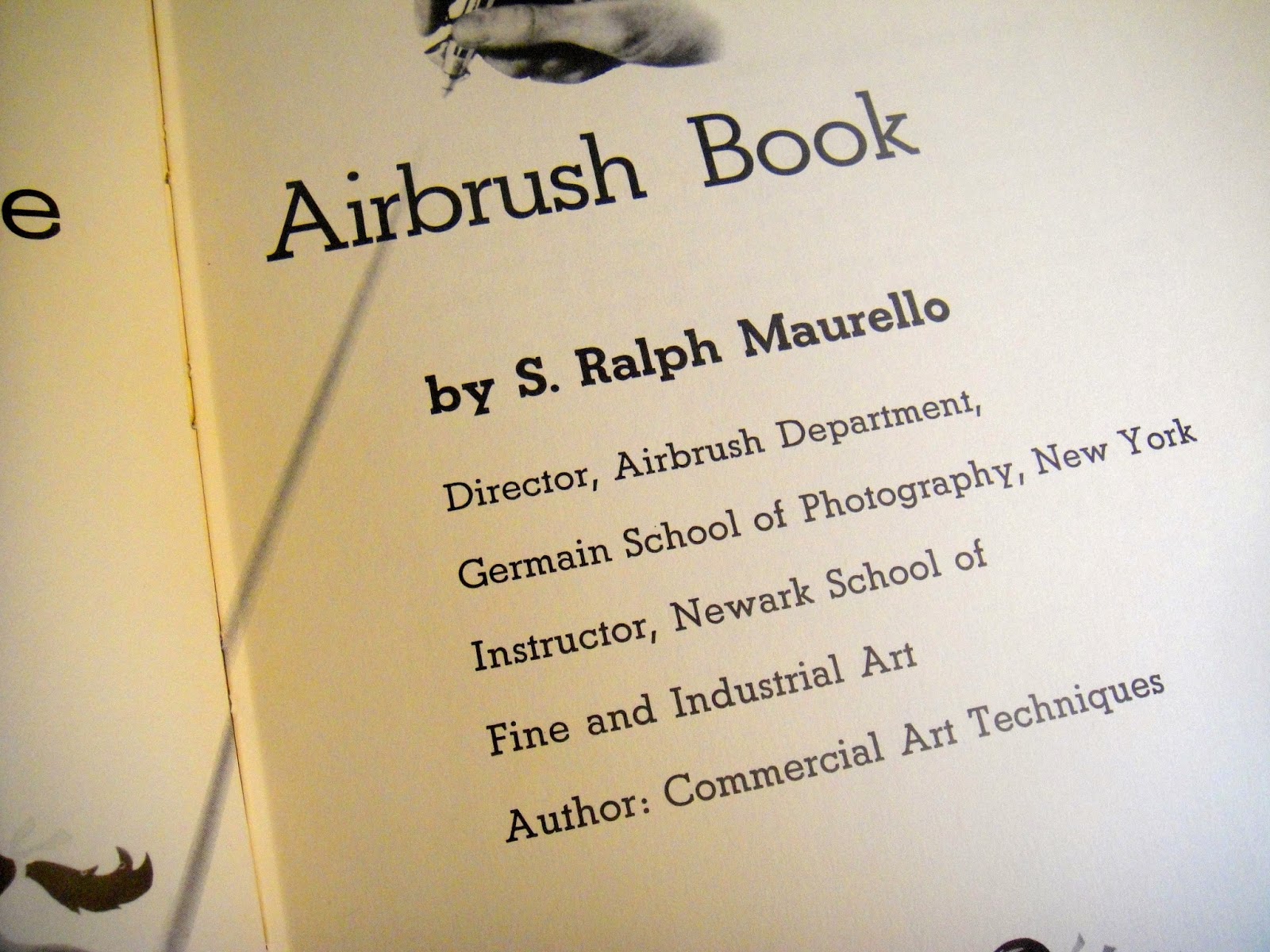 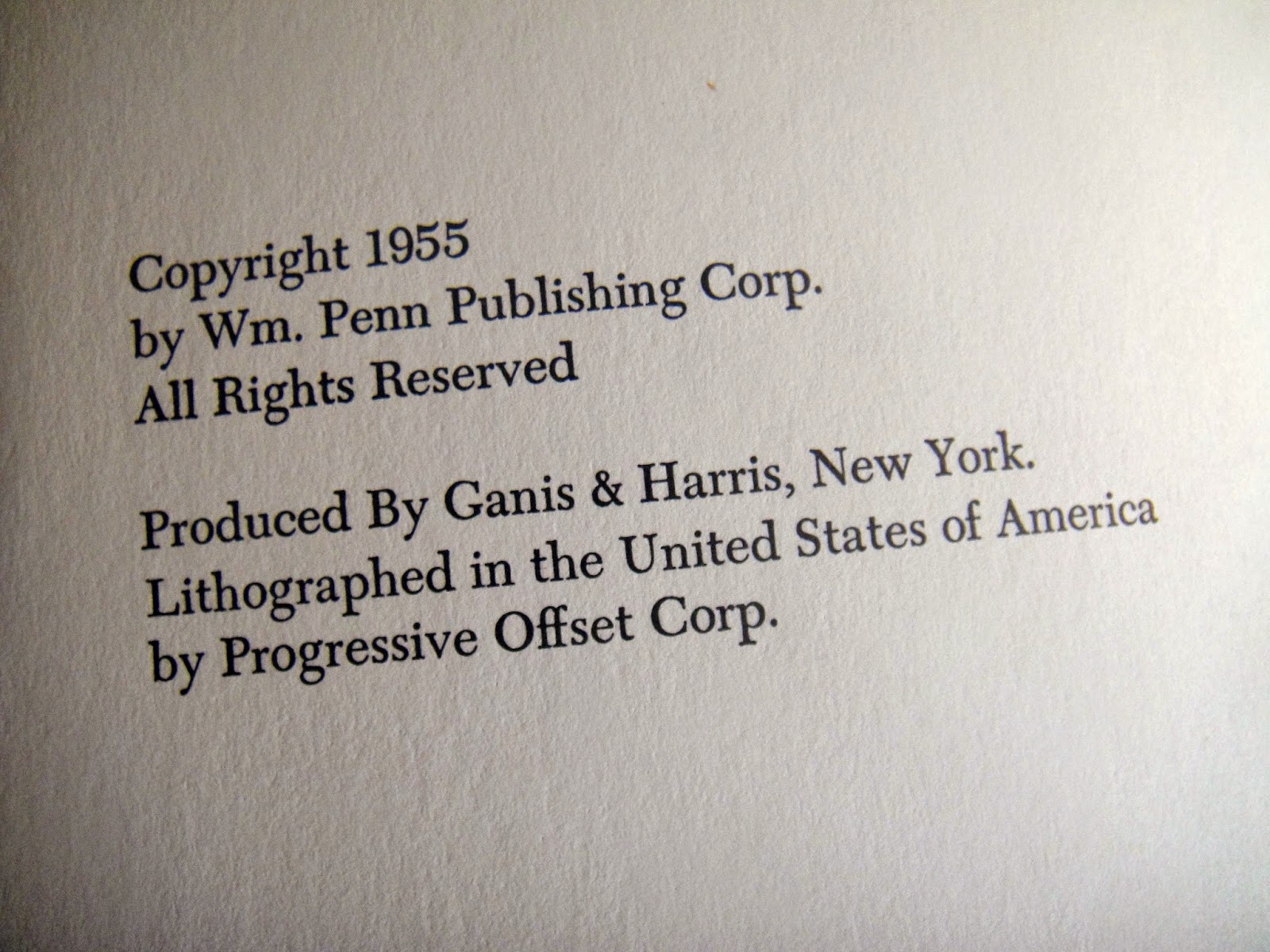 To all of my colleagues, clients, friends and connections ... 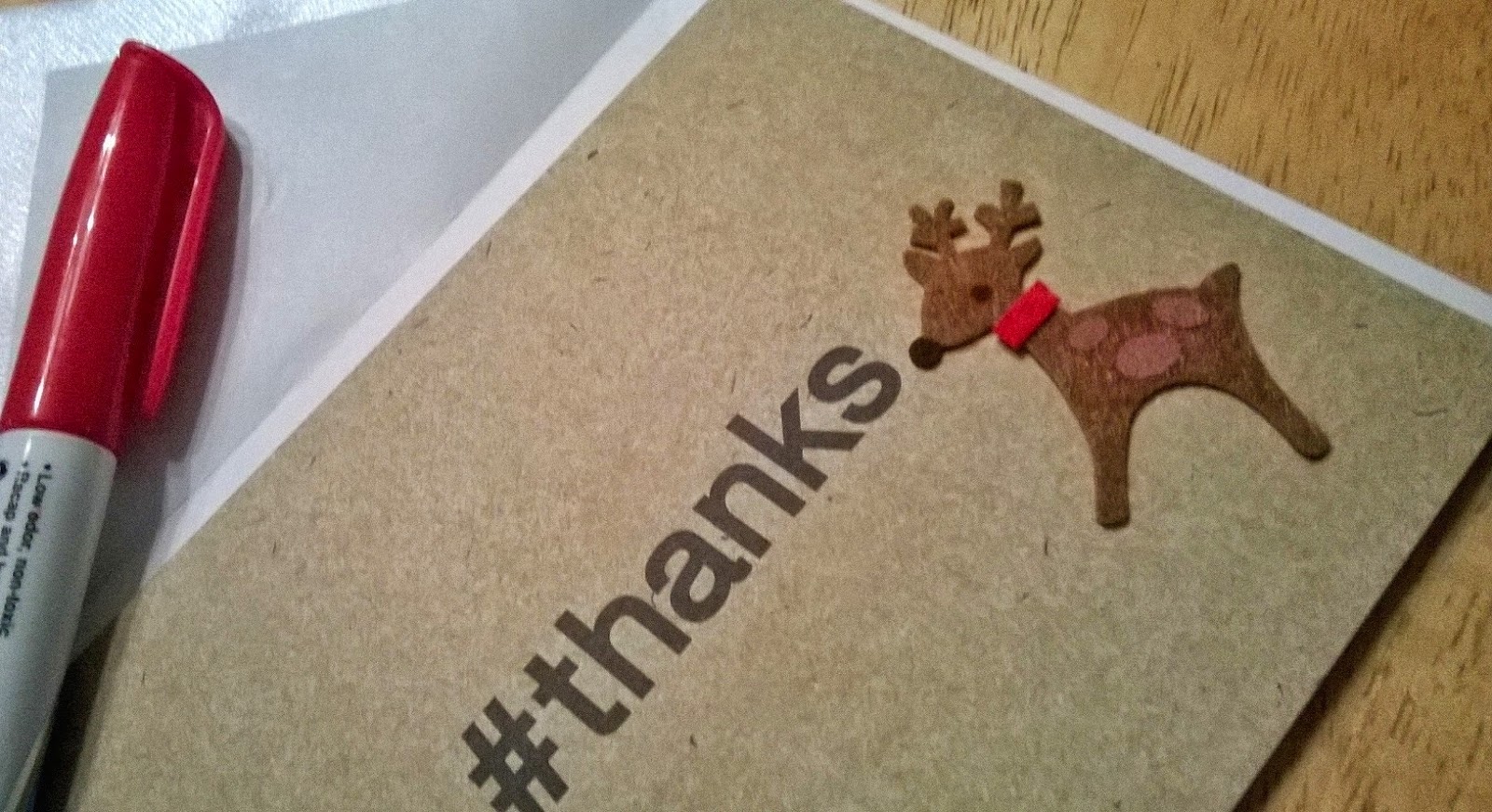 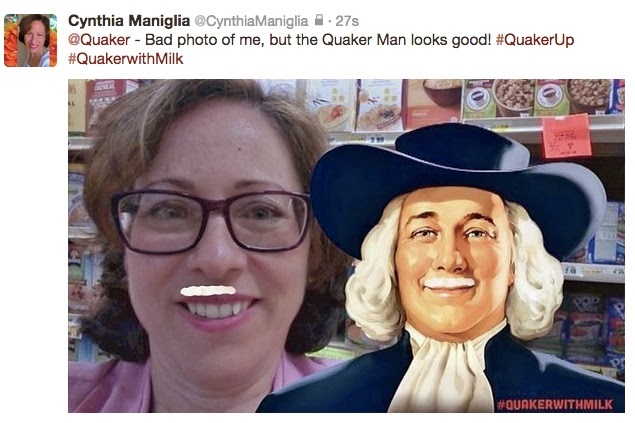 This October, the Quaker Oats Man is wearing a milk mustache as part of an augmented reality marketing experience. To bring the program to life and allow consumers to interact with the Quaker Oats man in a unique and dynamic way, Quaker is using the Blippar app as part of its promotion. Consumers can download the Blippar app onto their smartphones, scan specially marked packages in the supermarket, then take a selfie with the mustachioed-wearing icon to share on social media with the hashtag #QuakerwithMilk.

I tried out the Blippar app and here's my selfie with the Quaker Oats man. Fun and easy. I also gained access to some interesting recipes that combine oats with milk through the Blippar app promotion with Quaker, which was cool.

The oats & dairy promotion is aimed at encouraging Americans to make their oatmeal with milk instead of water and have a glass of milk on the side for a protein boost.

Email ThisBlogThis!Share to TwitterShare to FacebookShare to Pinterest
Labels: Blippar

Presenting the bookbook TM - changing the way you think about technology

IKEA is changing the way we think about technology with the bookbook TM.

You spin me right round, baby
Right round like a record, baby

And I was just getting into the duck face.


For a more sophisticated version (not mine) with music and special effects, check out donutselfie.com.

Email ThisBlogThis!Share to TwitterShare to FacebookShare to Pinterest
Labels: #donutselfie

My Selfie with the Quaker Oats man 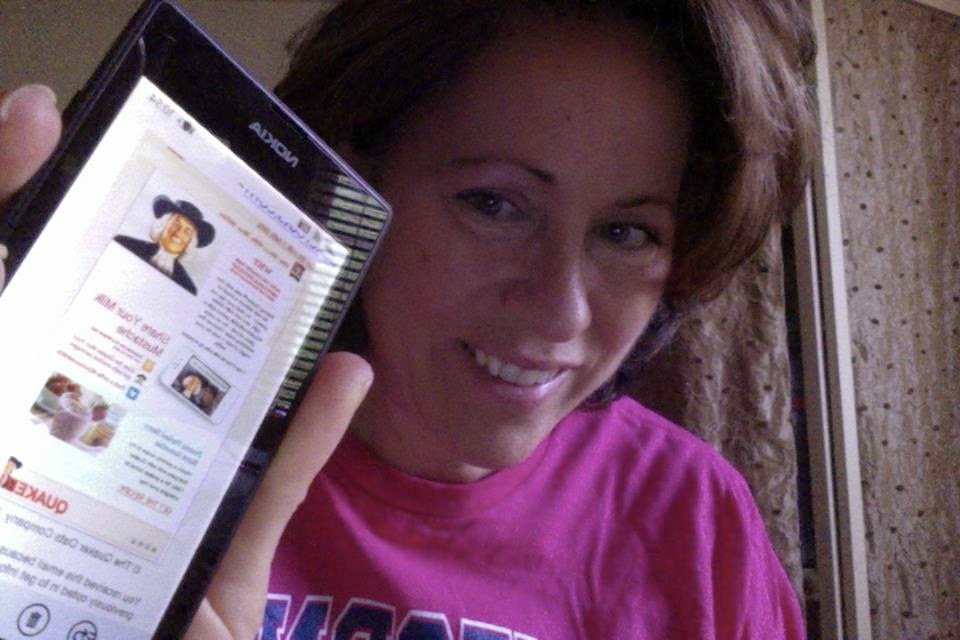 Cool - my copy for Quaker Oats arrived in my inbox today!
No comments: 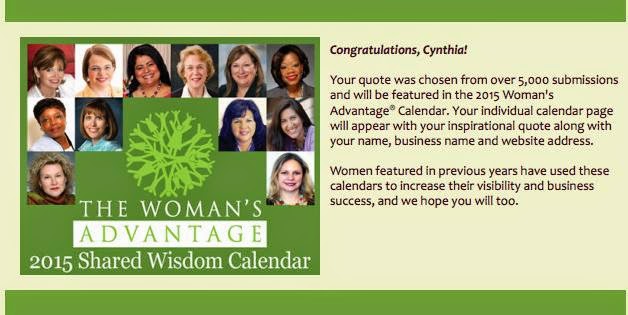 Thrilled to be featured yet again in The Woman's Advantage 2015 Shared Wisdom Calendar, on sale now.

How do freelance copywriters handle social media for promotion? And this is an example of how I use (or rather reuse) social media for promotion.
1 comment:

I copied a little trick from a 1926 ad to write a headline. And then!~

They Laughed When I Sat Down At the Piano But When I Started to Play!~

See it? Right at the end? That's the thing I'm borrowing from the famous advertisement copywriter John Caples wrote. His 1926 ad for the U.S. School of Music was a great headline then, and it's a great headline now. And that little thing at the end - the "tilde" (~) is, I think, one of the reasons why.

Oh, there are other reasons it's a great headline. Reasons like ...

It tells a story.

There's a beginning, middle and end in those 15 little words. There's the time that begins the story (when he sits down), the time when he starts to play (the middle of the story), and then there's an ending that's alluded to but not seen in the headline. But it is the alluding to, the hinting of the end of the story (a happy ending?), that grabs our attention and pulls us through, that makes us want to read more.

It's the punctuation that speaks volumes.

The little tilde symbol after the exclamation mark is reminiscent of musical notation, so very appropriate for the ad's offer of a free booklet and demonstration lesson to learn to play your favorite instrument. Instead of using the more common ellipsis, which often inspires a feeling of melancholy or longing, Caples ends his headline with a bang and flourish.

Or maybe his creative director or the designer put the "~" in the headline.

Whoever did it was pure genius.

Maybe they laughed at first, but then!~ Then what did they do? Did they cheer, clap or roar with delight? Did they boo or cry?

You've got to read on to find out what happened next.

What If All The Crap You've Ever Thrown Away Came Back To Visit You?

Oh Snap! The Government Just Got Put On Notice ... By An 8th-Grader.

Here's A Kid Who’s Determined To Get His Voice Heard Now. When He’s An Adult, It’ll Be Too Late.

All of these headlines evoke curiosity and are coupled with a video. They make you want to click and watch the video until the end, to see the punchline or get the pay-off, much like the famous John Caples headline from 1926.

I write headlines for a living - subheads, banner heads, blurbs, body copy, footnotes, disclaimers, and directional copy, too. And I think I'm going to give the ellipsis a break for now. I've been using it a little too much. Time for the tilde!~
No comments:

Having a job as a writer means I sit at the computer A LOT. I try to get up and down as much as possible, but sometimes I get so immersed in the work that I forget to take a break. So I just added this app to my computer. It's free - Google extension.

Sexist. And Pretty. At The Same Time. 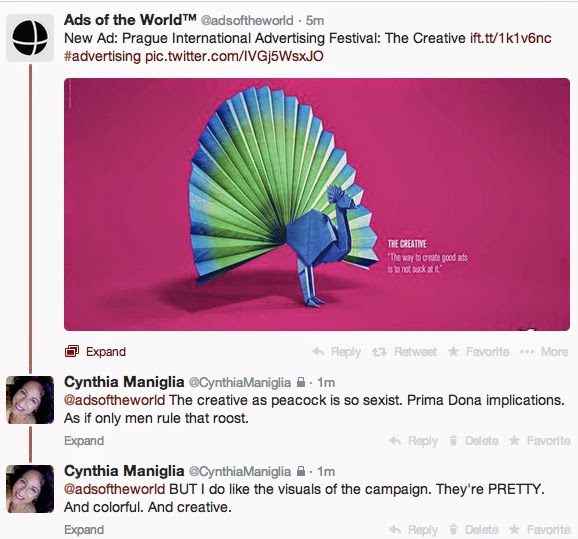 Thanks for stopping by

I write the copy.

Cynthia
Florida, United States
I write the copy that makes the whole world "act now." Well, maybe not the whole world - but at least a portion of the universe called "the target market." I believe marketers need to do more than just "know how to create great advertising"; you have to get behind great products and services. That's why I try to align my services as a writer, communicator and creative thinker with socially-responsible, environmentally-friendly products and companies. I founded my company, The Copy Grove, in 2003 - after having worked on the agency side of the direct marketing business since 1985. I am a versatile professional with a proven track record of long-standing controls. You can email me by clicking here. Thanks for stopping by this blog and be sure to visit again.